On November 30, 2017, a post from Boykot Israel Denmark was removed from Facebook. It was a message in which Boykot Israel called for boycott of Israeli Medjoul dates and accused Israel of ethnic cleansing of the Palestinian people.

Facebook sent their ‘guidelines’ to Boykot Israel – indicating that, in the removed post, Boykot Israel had violated these guidelines which forbid discrimination of persons on the basis of ethnicity, race, sex, etc.

Of course, this had nothing to do with reality: Boykot Israel is a clearly antiracist organization and  strongly condemns any form of racism, hereunder antisemitism (discrimination of Jews).

The boycott Israel campaign is a political response to the Israeli occupation, the Israeli apartheid, the continuous Israeli massacres and oppression against the Palestinians, the continued extension of the illegal settlements, the demolition of the houses of the Palestinians etc. Crimes which violate international law and meet growing popular protests all over the world.

Israel tries to cover up these crimes through a number of ’white washing campaigns’ (i.e. cultural and culinary campaigns which try to create positive images of Israel), by attacking the Palestinians and the various boycott Israel movements.

In September 2016 Facebook participated in a meeting with Israeli government members and there agreed how to avoid “hate speech”, i.e. Israel-critical messages on Facebook.

The BDS-movement, which Boykot Israel works together with, is growing all over the world. Artists in growing number refuse to ”play and act for Israeli apartheid”, banks and investment companies divest from Israeli companies, workers’ and students’ unions support the BDS movement. In big parts of the world new sections of BDS are established.

This development is by Israel considered as a political and economic threat. A result was that Israel in the Knesset in 2011 voted the anti-BDS law, thus attacking the freedom of speech.

Boykot Israel in Denmark (born in 2002) is inspired by the boycott campaign of the 1980’ies against the South African apartheid regime. We work for a general boycott of Israel, i.e. economic, cultural, academic, diplomatic and cultural. We call for a boycott of all and everything representing the state of Israel – as long as there is Israeli occupation and apartheid.

When the governments of the world do not react to the crimes of Israel against the Palestinians, then it is up to the popular movements to react. The boycott of the South African apartheid regime showed that it can work!

Screen dump of the text Facebook have removed 30. november 2017: 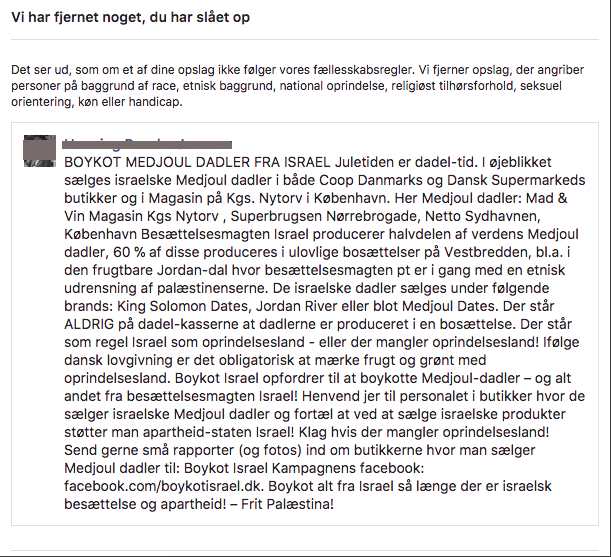