The decision to start a general Boycott Israel campaign was decided unanimously. ’General boycott’ means: boycott of Israeli consumers goods and other Israeli products, cancel the EU-Israel free trade agreement,  boycott of Israeli sport and culture etc., boycott of Danish-Israeli diplomatic relations etc. The longtermed aim is to obtain a total isolation of the state of Israel – as was the case with the boycott campaign against the apartheid-regime of South Africa in the 1980-ies.

The political paroles of the Boycott Israel Campaign are:

Solidarity with the Palestinians –

Israel out of the Occupied territories – NOW! – Boycott Israel.

The basis organizations of the Boycott Israel Campaign are the local boycott groups, consisting of local people and local organisations.

During the first 1 ½ years existence, the Boycott Israel Campaign has carried through a big variety of actions and manifestations have been executed: Manifestations on Saturdays in front of supermarkets and distribution of boycott-materials. A big manifestation in front of the weapon factory  TERMA in Aarhus which produces elements for F-16 planes and export them to USA which delivers them to Israel . Boycot demonstrations in front of volleyball and football-matches with participating Israeli teams, boycott manifestation in connection with Israeli artists, for instance a concert with an Israeli band in the Museum Louisiana – north of Copenhagen. Demonstrations several times in front of the Israeli Embassy of Denmark where we delivered  protest letters.

During the EU Summit in Denmark , we organized a huge Boycott Israel Demonstration on Thursday December 12, 2002 in Copenhagen protesting especially against the EU-Israel Free Trade Agreement.

Here it was decided to give priority to the following activities:

We continue the campaign against the Danish weapon fabricant TERMA in Aarhus . 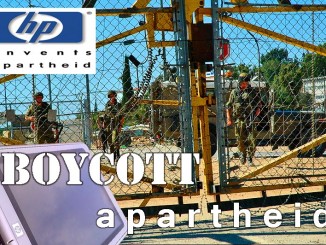